The next regular monthly meeting will be held on March 21st at 10:00am.

Breakfast before the meetings will resume on March 21st from 8:30am to 9:30am.

We are trying to stabilize the stream bank above the handicap deck and make some other habitat improvement upstream. If we don’t accomplish this project we will probably loose the handicap deck in the near future. Please help us get this project done by donating to the STREAM PROJECT. Send donations made out to East Fork Sportsmen’s Club Stream Project c/o Mike Thierfelder, 508 N Main Street, Coudersport, PA. 16915

We are planning to make a new rifle range in a new location on the club property. Unfortunately it will require donations for us to build it and until the STREAM PROJECT IS COMPLETED we will not begin raising money for the rifle range. Please donate to the stream project to complete it. 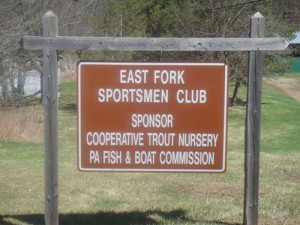 HISTORY: Pollution and the stench of waste materials dumped from the paper mill in Austin and the tannery in Costello, into the streams along Route 872 South towards Wharton, prompted 16 men to meet on March 11, 1938 to form the East Fork Sportsman’s Association. The total membership in 1938 was 55 members. The  annual dues in 1938 was $1.00.  By 1973 the club membership had grown to include 46 (local members) and 523 (non-local members) The initial cost of the fish ponds in 1976 was $4,234.04.  The first fish were placed in the new ponds on July 15, 1976. (2,000 total) By 1984, the club membership had grown to 662 members.  Today, the members raise more than 12,000 trout fingerlings for stocking throughout the area.  The club also puts on their annual children’s fishing derby and BBQ, which registers around 200 kids each year.  This provides kids (age 12 and under) the opportunity to not only fish for the stocked trout, but also the chance to win door prizes.